Turkic Council: From inertia to assertion of ambition
24 Oct, 2019 | By Yalchin Mammadov
Share:

Good news for the Turkic speaking countries which have teamed up for regional integration! Recently, the Turkic Council (TC) held it’s seventh summit in Baku, where it witnessed important developments. First, Uzbekistan became the fifth member of the organization. Second, some weeks before the summit, the council opened a brand new office in the Hungarian capital, Budapest. However, to understand these developments, we have to ask: What is the Turkic Council, and why it is becoming increasingly important?

Since the early 1990s there have been various initiatives to try and unite those newly independent countries with predominantly Turkic speaking populations under an institutional structure. The countries concerned are Azerbaijan, Kazakhstan, Kirghizstan, Turkmenistan, and Uzbekistan, along with Turkey. Fuelled by the Azerbaijan–Turkey strategic partnership, these initiatives nevertheless found it difficult to achieve a tangible outcome, often seeming satisfied with the non- binding declarations that followed each summit of the Heads of State.

Holding the first summit in 1992, it took a total of ten before in 2009 the members became the Cooperation Council of Turkic Speaking States, or Turkic Council, “an international organization whose main purpose is to promote comprehensive cooperation between Turkic- speaking states” (Nakhchivan Agreement). The only downside is that just four of the six Turkic-speaking countries – Azerbaijan, Kazakhstan, Kirghizstan, and Turkey – joined the organization. Despite taking an active part in all the pre-2009 summits, in the end Turkmenistan did not sign the Agreement establishing the TC due to the principle of positive neutrality that the country embraced. As for Uzbekistan, the leadership of the country continuously demonstrated reluctance to join the initiative, as a general tendency in its then foreign policy.

The TC has an elaborate institutional design comprising the Council of Heads of State, the Council of Foreign Ministers, the Council of Elders, the Senior Officials Committee, and the Secretariat. Following the example of the longstanding organizations concerned with

While blowing out ten candles for the 2019 anniversary, perhaps the founding fathers of the organization wondered if the TC had become what they initially envisaged – perhaps a global actor dealing autonomously with topical regional issues, or the sovereign Turkic world’s EU, Mercosur, or Arab League. There is no doubt that it has become a platform of exchange and socialization among its member states’ high officials. Since 2011, its annual summits of Heads of State have adopted specific topics to evaluate the organization’s achievements and set goals. One of the main pillars of the TC’s foreign policy coordination is the search for common positions in international organizations, as stated in the founding Agreement. It is worth mentioning that all the member states see the organization as a platform for cooperation and cultural exchange, and nothing beyond that. An analysis of the articles included in the statements of the Heads of State of the Member States of the Turkic Council along with the welcoming address of the Prime Minister of Hungary – published on the occasion of the Baku Summit – suggests that the construction of a supranational body scrutinizing good governance in the member states is far from being the Council’s goal (see the word cloud). 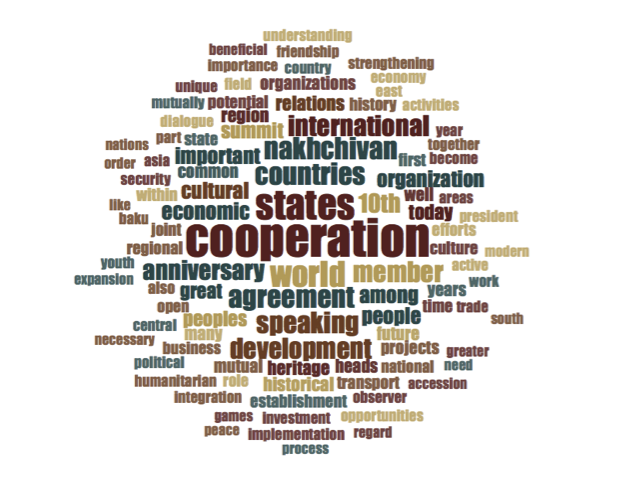 Thus, a common position with major international organizations seems to be the main leitmotif for developing the Turkic Union. Azerbaijan’s President Ilham Aliyev’s statement during the 2009 signing ceremony summarizes the initial goal:

"We know that it is not always easy to defend one’s position on the international stage. If we are together, if we have a single voice on certain issues, and if strengthen this alliance with regular efforts, our international positions would be stronger. Turkic-speaking countries have all the assets – natural resources, oil and gas fields, favourable geographical situation, strong economy, talented people and existing modern infrastructure [...]".1

Although the foreign policy priorities of the member states do not always converge, ranging from restoring regional security and territorial integrity to economic and political stability, analysis reveals that the “Turkic Council states’ voting agreement on foreign policy issues has been increasing steadily, which may indicate that their overall foreign policy preferences have been converging.”2 Further analysis shows that, since 2015, trade turnover among the Member States of the Turkic Council has increased by 22 percent.3

In the absence of further empirical data allowing us to measure whether the last ten years of the TC have been a success or a failure, it is possible for optimists to stick to a powerful argument – enlargement. In 2018, Hungary became an observer member of the TC. Unexpectedly? Not really, as Hungary had demonstrated its interest in the organization since 2013, when, for the first time, Hungarian representatives participated in the Fourth General Assembly of TurkPA, held in Ankara. In 2018 Hungarian Prime Minister Viktor Orbán declared that “Hungarians see themselves as the late descendants of Attila the Hun” and are proud of their Hun- Turkic kinship. In 2019, he reiterated the historical links that connect Hungary to the Turkic world:

"We are proud of our origins that go back to Central Asia, the territory of Magna Hungaria, and we are proud to preserve our eastern roots in our language, culture and folklore".

He also mentions his country’s potential role as a bridge between the Turkic world and the European Union. Arguably, historical links are not the only reason behind Hungary’s involvement, and a certain degree of pragmatism accompanies this move. Nevertheless, the TC’s foundational documents contain no provisions limiting the membership of the organization according to ethnic, cultural, or linguistic conditions.

Finally, a remarkable metamorphosis in Uzbekistan’s foreign policy in recent years has brought this country back to the club. This development may potentially be beneficial for both sides: on the one hand, protecting Uzbekistan from regional isolation and, on the other, strengthening the TC through the involvement of one of the key countries of Central Asia. Uzbekistan’s strongman, Mirziyoyev, has made the expansion of trade, economic, transport, and investment ties a priority underlying his country’s involvement in the organization.

Uzbekistan’s membership seems to have reinvigorated the TC, with the Baku Summit a forum for ambitious declarations of Heads of State on further strengthening cooperation. What still remains to be assessed is whether the governments are ready to take up the task of translating their rhetoric into reality. In terms of political solidarity or the efficacy of the Turkic Council, there has certainly been no major crisis to test it. Furthermore, the absence of public debate on the future of the organization indicates that the organization as yet gives no impression of being a herald of the long-awaited Turkic unity which many intellectuals of the region dream of, and does not seem likely to abandon its bureaucratic posture any time soon.