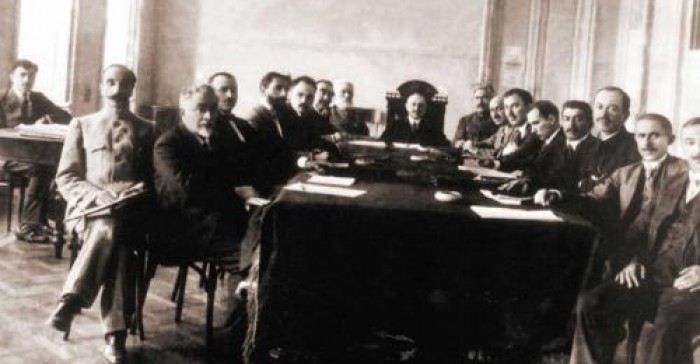 Participants hailed the importance and symbolism of the first republics and how they inspired the regaining of independence in 1991.

Young people from South Caucasus countries participated in a highly symbolic event in Tbilisi on Friday, 11 May to jointly mark the 100thanniversary of the establishment of the modern republics of Armenia, Azerbaijan and Georgia in 1918. The event was held in the framework of a regional round table meeting that explored the themes of regional co-operation, organised by LINKS and the Borjomi Innovators Network (BIN).

At the start of the event, AYAPE borad member Ramazan Samadov participated at the event and made a presentation on relegious diversity of Azerbaijan.

In her opening remarks at the start of the meeting Dame Audrey Glover, a renowned European human rights and women's rights defender, who is also Honorary Chair of the Borjomi Innovators Network and who participated in the meeting as a special guest, paid tribute to those who one hundred years ago were involved in the establishment of the modern states of Armenia, Azerbaijan and Georgia in 1918 and to all those who contributed to the process then, and since.

Dame Audrey said that it has been recognised that a greater contribution could and should be made by the younger generation in relation to the management of conflict and the establishment and advancement of peace processes.  It is vital that young people are given the opportunity to participate in programmes of new thinking, and that enable better co-ordination and stronger cooperation.