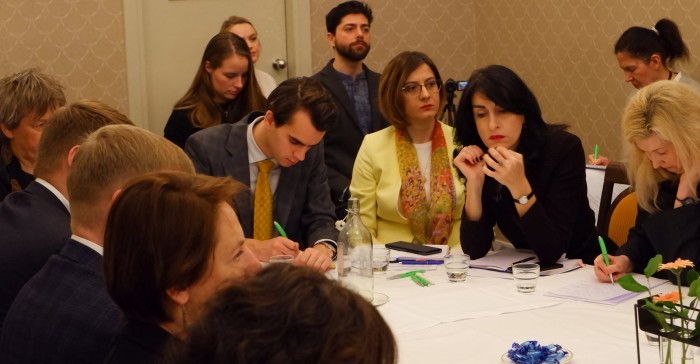 AYAPE and LINKS Europe under the distinguished patronage of Andris Ameriks MEP (Group of Socialists and Democrats) and Ilhan Kyuchyuk MEP (Group Renew Europe), have organised a half-day conference with the theme "Regional and sub-regional co-operation in the EU neighbourhood: the Azerbaijan-Georgia-Turkey partnership", at Hotel Leopold, Bruxelles, on Thursday, 5 March 2020.

The conference was attended by high-level panelists, including Mr Lasha Darsalia, the Deputy Foreign Minister of Georgia, the Heads of Missions of the three countries to the European Union, Ambassador Mehmet Kemal Bozay of Turkey, Ambassador Fuad Isgandarov of Azerbaijan and Ambassador Dr Nathalie Sabanadze of Georgia, as well as Members of European Parliament, Mrs Anna Fotyga, Mr Andris Ameriks and Mr Ilhan Kyuchyuk.

According to Mr Lasha Darsalia, Azerbaijan - Georgia - Turkey partnership was a framework with a positive agenda and was not directed against anyone. Georgia co-operated with Azerbaijan and Turkey bilaterally, but also with both of them multilaterally, particularly in the promotion of the East-West corridor. Darsalia said that Georgia's two main foreign policy objectives were Euro-Atlantic integration and the restoration of territorial integrity, and the trilateral co-operation was also important to achieve these objectives.

Heads of Missions of the three countries to the European Union have positively assessed the work that has been done within this framework. Speakers also referred to how the European Union can engage with the trilateral co-operation, on areas such as connectivity, energy climate change and innovation. The panelists gave an insight to different aspects of the partership.